If using illicit anabolic steroids or human growth hormone would put your health at risk, would you still like to get ripped and pack on some muscle growth or lean muscle mass? Finding safe, legal steroid alternatives to conventional anabolic compounds is challenging enough without having to guess which ones would be effective. In this post, we contrast the top legal and safe anabolic performance ingredients available. To find out more about how they operate and the components used, keep reading.

One of the most well-liked supplements in the fitness sector is unquestionably Creatine. It has been around for more than 20 years and has grown to be one of exercise science’s most researched supplements for muscle growth, fat burning and athletic performance. But there still seems to be a lot of misunderstanding and obscurity surrounding the addition. I’ve been asked a lot lately regarding the use of creatine, its effectiveness and safety, as well as the relevance for athletes. This article’s goal is to equip you with enough knowledge to make an informed decision on whether creatine belongs in your supplement regimen by addressing some of these frequently asked topics.

What does Creatine do?

Glycine, arginine, and methionine are three amino acids that are combined to form the chemical molecule known as Creatine.

The ATP-CP energy system, sometimes called the phosphagen system, depends on creatine to function. Short-duration, high-intensity actions like weightlifting, sprinting, and jumping are propelled by this system. Adenosine di-phosphate is created when adenosine tri-phosphate (ATP) is broken down to release energy (ADP). Creatine is used to recycle ADP into ATP at the cellular level, which delays exhaustion and improves exercise performance, and as a result may lead to increases in lean muscle mass. [R]

Creatine studies have also shown its effectiveness as a muscle growth or muscle gain aid. Creatine enhanced muscle mass when added to an exercise program, according to an 8-week research study. The study showed promising results as bench press strength increased, while myostatin levels dropped, which is a protein that prevents muscle cell growth. [R]

Why should I use it?

Your body produces modest amounts of creatine. Some types of animal-based protein, such red meat, also include it. Because the amount produced by your body and available through diet is so minimal, supplements can be useful. According to some research, dietary inadequacies in vegetarian and vegan athletes may considerably benefit from creatine supplements. [R]

It is thought that taking this supplement might significantly improve endurance. But what does it actually do in the body? Is beta-alanine useful for all types of exercise, or only specific types of endurance work? Let’s examine the mechanism of action.

How Does Beta-Alanine Work?

Beta-alanine is regarded as a non-essential amino acid, which implies the body can produce it. While the majority of amino acids are used to make protein, some, such as beta-alanine, have other uses in the body.

The skeletal muscle of the body stores carnosine, a naturally occurring antioxidant, which is derived from beta-alanine. Beta-alanine and histidine, an amino acid used in the synthesis of proteins, are the building blocks of carnosine. During times when pH levels decrease, carnosine aids in preventing the production of excessive hydrogen ions in the muscles. [R]

Beta-alanine can be found in the bodies of numerous species in addition to the human body such as beef, chicken, and fish.

What Does Beta-Alanine Do?

Acidosis, which is what leads to an increase in hydrogen ion release in skeletal muscle, is what lowers the pH levels in the muscle. Fatigue may result from this acid accumulation, which will affect performance at high intensities. Beta-alanine may postpone the onset of this acidosis and aid in pH balance in general. It has been demonstrated that people who engage in severe training have higher levels of muscle carnosine.

Carnosine levels in the muscles may rise if we can boost the body’s supply of beta-alanine and improve the resources available for carnosine. This brings up the potential performance benefit of beta-alanine for endurance. Increased endurance leads to higher load and intensity in training and as a result muscle growth, fat burning, and cardiovascular health.

An investigation published in 2018 looked at the effects of beta-alanine on volunteers completing a 5-week resistance training regimen. Back squats, barbell step-ups, and loaded leaping lunges were the three leg-training exercises that the researchers had given to 30 trained individuals three times per week. Some participants received a placebo and others beta-alanine.[R]

The workload and volume gradually increased over the course of the five weeks. The beta-alanine group demonstrated more power production than the group taking a placebo at the conclusion of the fifth week, according to the author’s retest of the participants.

Because of the role that L-carnitine plays in energy generation, which has a direct bearing on the advantages of exercising and fat reduction, it is one of the supplements that has been the subject of substantial research. Recent reviews of this pill as a post-workout and weight loss aid have been overwhelmingly positive.

Simply said, L-carnitine is a dipeptide formed from the amino acids lysine and methionine, which are both necessary. It is primarily produced by the liver and kidneys in the human body and is stored in the cells of the heart, brain, and skeletal muscles. The muscles contain more than 95% of the body’s L-Carnitine reserves. Because the body can make carnitine, it is not regarded as an essential nutrient. Instead, it is categorised as a conditionally-essential amino acid since, despite the fact that our bodies do so, they may not create enough of it. Your requirement for carnitine rises significantly when you are working toward a major goal (such as weight loss, improved physical performance, or faster muscle recovery).

Vegans and those with genetic abnormalities may not be able to create enough carnitine in their bodies. Red meat is the highest source of carnitine, which is mostly found in meat and dairy products.

Although carnitine serves many important bodily activities, its primary role in the body is in the generation of cellular energy. L-carnitine may have the ability to burn fat; it improves how your body uses fat as fuel, enabling you to exercise for a longer period of time.

In the body, carnitine aids in the movement of fat, particularly long-chain fatty acids, into the mitochondria, which serves as the cell’s powerhouse and is where the fat is oxidised to release energy (ATP) for use as fuel. When engaging in light to moderate exercise, these fatty acids are the main source of energy.

Is It Backed by Research?

People all throughout the world are concerned about slow metabolism. As a result of the body’s fat reserves building up, it results in unwanted weight gain. In addition, people consume more calories than they burn. This is when carnitine is most helpful. By delivering fat into the mitochondria, where it is converted into ATP for energy, it improves fat metabolism. Carnitine converts fat cells, which would otherwise be stored as fat, into energy. Both when you exercise and when you are at rest, it speeds up the weight-loss process, but studies show that it works best during vigorous exercise. [R]

Additionally, Carnitine helps to improve insulin’s ability to function on muscle cells in addition to its role in fat transfer. Even after a meal high in carbohydrates, it helps to maintain low blood sugar levels and promotes glycogen replenishment.

Where can I find these ingredients?

You can find all these ingredients as separate supplements in most health stores as it is well known as natural steroid alternatives. However, if you are looking for a holistic all in one option, Prometheuz Health offers a supplement called Super Mass Bomb This muscle building pills is compromised of 5000mg Creatine, 2500mg Beta-Alanine, and 2000mg L-Cartinine Tartrate. 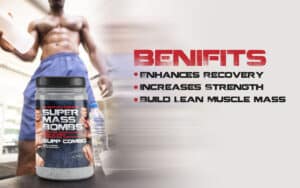 The growth in popularity of anabolic steroids for muscle growth has been frightening. If you believe in your health and would like to avoid the side effects associated with illegal anabolic steroids, we strongly suggest you do your research and stick to ingredients that promote healthy testosterone production in a natural and legal alternative.